I was down in London at the weekend, primarily to get my annual theatre fix but I also had a Sunday funday to fill and decided to scoot on over to Shoreditch! It was such a lovely chill afternoon and blissfully sunny! Luckily one of my favourite people was coming down to London that day with her boyfriend to see the Childish Gambino gig so we were able to meet up and explore together.
After having seen the market a few times over in Sorted Food YouTube videos I was pumped. We decided to set a strategy for maximum tasting enjoyment so that we could try as much as possible. We each bought different things that we could all share and so although the restraint was not easy it meant for a gradual and long but seriously tasty lunch marathon.
Right in the centre of the market there is The Kitchens which are like somewhere between market stalls and restaurants all in one big square and then going out from there, there are more layers on stalls that have food and drink but also clothes, trinkets and whatever else. We were on a food mission so didn’t really pay attention to the other stuff. Our strategy was to start by circling the kitchens and grabbing whatever caught our eye and then to move outward from there and what a delicious journey it was. 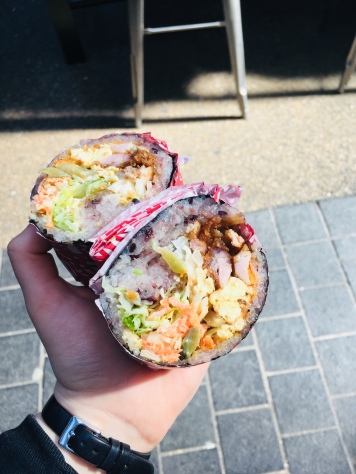 So before Hannah and Andrew joined me I started off with a Mango & Orange pressed juice from Pink Grapefruit Cold Pressed Juice because I was really in the mood for something cold and fresh.
Once I caught up with my market pals we began our mission. Firstly, we picked up the Vegan Dumplings in Soy Garlic Dressing from Dumpling Shack (boiled vegan dumplings with vermicelli, celery, carrots, shiitake mushrooms and tofu filling) which were lovely. In a similar vein we picked up the Miso Mushroom Steamed Bun from Yum Bun (Portobello mushrooms, toasted walnuts, miso glaze, cucumbers, spring onion). I don’t know exactly how to explain the flavour but this was sooo tasty and the different textures made it such a good time, this is definitely one of my stars of the show. Next Hannah and I shared the most delicious Crispy Chicken RiceRoll from RiceBrother which contained Szechuan peppercorn and garlic marinated chicken, egg omelet, Youtiao (Chinese style fried dough stick), coleslaw salad and honey soy sauce dressing, the flavours and textures in this bad boy were on point. At this point I was very very food happy but our impressive restraint meant that I still had room for more delicious stuff. We decided to grab something a bit sweeter so we got Adzuki Bean, Vanilla Custard and Matcha wheelcakes from Wheelcake Island which were gooey and warm but not my taste exactly.
After a bit of a break we jumped back on the savoury band wagon and Hannah and I shared the duck salad box from The Duck Truck which involved mixed leaves, pomegranate seeds, cucumber, spring onion, french dressing, asian slaw and shredded duck in hoisin sauce. It was tasty and rich but still pretty fresh as we were missing some veggies so far. Our food marathon was finally rounded off by sharing some delicious vegan doughnuts from CrossTown – a chocolate ring with dark chocolate truffle and an orange blossom with pistachios, pomegranate and elderflower glaze, both of which were delicious and not over-sweet. The main plus for me was just the quality of the doughnut, I feel like you could enjoy them whatever the flavour and the fact they cater to vegans is a plus. 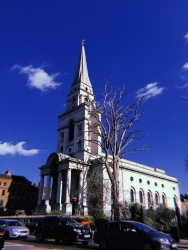 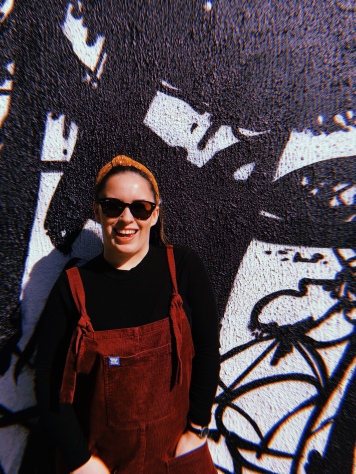 Gotta do it for the gram 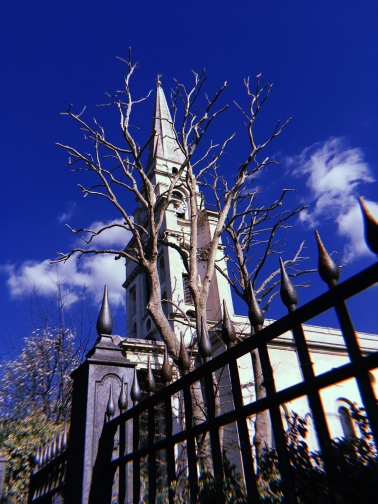 Besides the food marathon, it was generally just a really pleasant day. Shoreditch is such a cool place to explore (groundbreaking discovery, I know). It was a lovely warm spring day and the streets are like an easter egg hunt for interesting graffiti. After walking around for a bit we decided to put our feet up with a drink in the Boxpark. This is like a huge shipping container that has loads of pop up shops. If we hadn’t just eaten the entire market, I could totally have spent the afternoon munching away on the food stands in there. But instead we hit the bar and sat by the window so we could take in that rare vit D. I feel like Boxpark would be an absolute dream for lazy summer day into night drinks and snacks, it’s so chill (and 100% millennial wanky, but hey, that’s our culture). So Shoreditch is a big win for me and that’s the best possible Sunday funday I could have in London when there’s no shows to enjoy.
And just in general I had a lovely day with one of my favourite people in the world!

Venice | Bologna 🇮🇹
The Mika obsession has been firmly reinstated ❤️
Excuse me for a sec but OH MA GOD I ACTUALLY WENT TO FREAKING EUROVISION!
!!!!!
Today's office
Don't get to dance as much these days but my life still revolves around it 🩰