Okay so I FINALLY did it and saw Billy Elliot in person after being obsessed with the soundtrack, watching the stage DVD and spending the last few weeks working in the same building as the show happening except I never seen or heard any of it from behind the bar! As a dancer and musical theatre fanatic, Billy Elliot is obviously a musical that is going to appeal to me. I have read the book, seen the film and now seen the show! 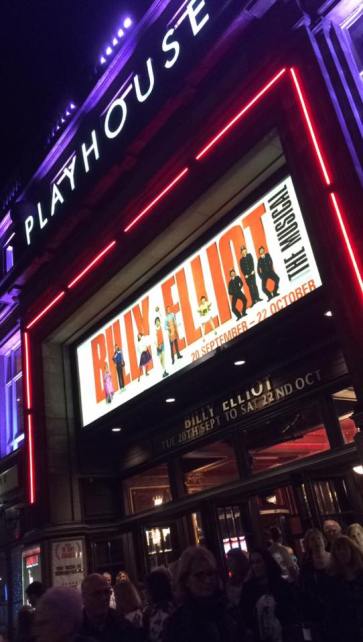 I wasn’t particularly surprised by anything that happened because I know what actually happens but what did surprise me is how much it hit me. That live orchestra just fills you up with so much emotion. I was quietly sobbing (a lot) during The Letter and anything to do with his Mam because it immediately sends me into that *oh my god, what if that was me?* thought process and I think about how much I love my mum. She’s the best.

Anyway, my highlights were the scenes that I thought they would be but; Solidarity, Electricity, Expressing Yourself and the dream sequence. However what caught me off guard is how emotional Once We Were Kings made me – it’s just so powerful. Our wee Billy was so talented and the humour of this show never disappoints. I have a soft spot for Grandma and the bit where Mrs. Wilkinson talks to Billy before he goes to London gives me all the feels. At the end of the day, the reason why I love this show so much is because I bloody love dance and the choreography in it is second to none. Big shout out to my favourite scene of choreo, Solidarity, it is soooo clever.

It was really nice to have my mum come down and visit me so we could see this show and now I can give my honest review of the show when I’m working in the bar. Last night at work I managed to sneak in and watch a bit of the performance and it reminded me how spectacular it is.

JAN
🕑
I'm too cold today so reminding myself of a time when I was too hot
🖼️
🪩
Gymnastic is such an unreal sport, like, the stuff they can do is literally bananas🤯