This here is a travel blog all about my recent visit to Niagara Falls. It is the most beautiful place I have ever been, it’s crazy to think that the real world can be that darn vivid. I had an absolute blast pretending I’m some kind of photographer but wish goregous views like that, the great photos were kind of handed to me on a plate. For that reason, this post is a lot more visual than my usual thing, but it is beautiful! I would very much recommend taking a trip over there. When it comes to visiting the Falls you have to decide if you want to be on the American or Canadian side of the border (but the Canadian side is better). Whilst it is beautiful there is not a huge amount of things to do so a short trip is plenty of time to make sure you’ve seen everything – we were there for three days and didn’t really miss out on anything! It was a very chill place to be, especially in contrast to our time in NYC. We treated ourselves to a massage while we were there and there was a huge jacuzzi bath right in the middle of our hotel room (dreamy)!

Niagara Falls
There’s a bunch of activities all around the Falls that you can get up to, the simplest way to access all of this is for you to pick up an Adventure Pass which includes a bunch of different things. We started with a wee 3D movie that they call Niagara’s Fury, it wasn’t the most spectacular experience in the world but it doesn’t take too long. After that we headed down to the tunnels that take you behind the falls, as you can see from the photo below you kinda can’t really see much because the water is so powerful it just makes a white wall. You can hear it but you can’t really see what’s going on. On this activity there is an observation deck that takes you right up beside the end of the Falls so you can really get a sense of how much water there is falling. Probably the best activity on the pass that gets you right up in the Falls is the Hornblower Cruise. My mum loves a boat so we had to do this, we were stood right up on the front of the boat and we ended up getting SOAKED, but it was fun! The boat goes right up into the mist and the water is obviously a bit choppy given the massive amount of water coming off the Falls so the waves were coming up on the boat and attacking us. But it was good fun! 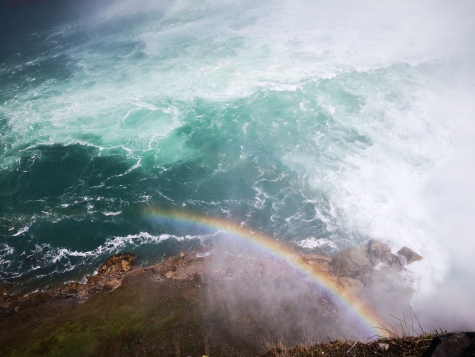 I love the rainbow in the mist 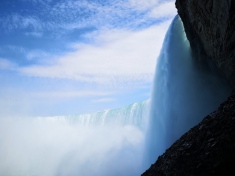 Right up next to that powerful water

The next day we did the White Water Walk which was also included in the pass. This gave us a wooden walkway so we could go alongside the rapids that lead from the falls down the river to the whirlpool then out to sea. They are apparently the most dangerous rapids in the world but what really struck me was how frickin green they were. After that we took an aerocar over the top of the whirlpool that sends the water off in a different direction, the views here were insane! 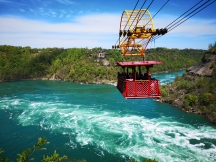 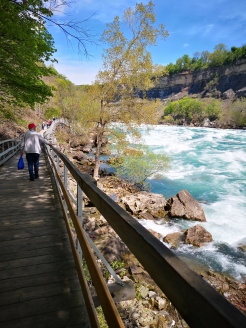 The other little thing we did with our pass was visit the Butterfly Conservatory. Honestly, you could give this a miss but we had some time and it was on our way home from some other things so we popped in. I gained a pal who decided to perch over my heart like a brooch and stayed there for quite a while, it was kinda magic! 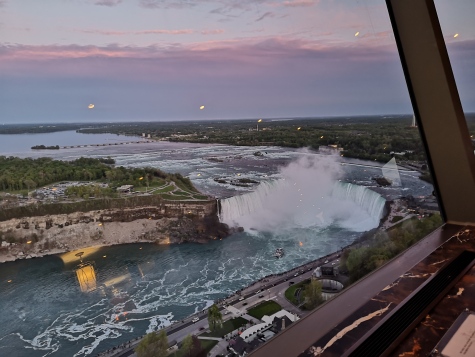 Dinner with a view @ Skylon Tower

Dinner with a view @ Skylon Tower 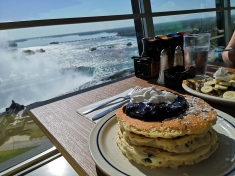 Breakfast with a view @ iHop Tower

In addition to the stuff on the pass we did a few extra things – there is an IMAX cinema where you can see a movie about the history, myths and stories related to the Falls (missable) and in the same building they have a Daredevil Exhibit dedicated to the crazy people who decided to go over the Falls in various contraptions and whether they survived or died (interesting but you could pass on this too probably).
We also booked to have dinner in the rotating restaurant at the top of the Skylon Tower, this was definitely worth doing and really cool! It’s a little on the expensive side and, as is the case in the Americas,  the portion sizes of the meals are ridiculous. But the view is really cool and the experience is worth it, I think! I had a lovely glass of red, onion soup and a Mediterranean vegetable lasagne type thing and we got to gaz over the Falls, witness the sunset and we were almost in the right spot for the nightly fireworks they set off over the summer. Little did we know the iHop my mum found vouchers for ended up being in another tower overlooking the Falls so we also had breakfast the next morning with a view!

Jackson Triggs winery
Our next adventure was in the nearby town of Niagara-on-the-Lake (sounds similar, is different). We had a morning tour at the Jackson Triggs winery (which is one of the two big boys in the area). Funnily enough our tour guide was actually from Edinburgh but hadn’t been there for 20 years, what a small world! He told us about their wine production and we got four tastings throughout the tour – a sparkling, white, red and one of their famous icewines which is a super sweet dessert wine. After the tour we chilled in the sun for a minute and got 4 more tasters so I could decide which bottle to buy as a gift for my dad. A winery in the sun in Canada is definitely my new happy place! 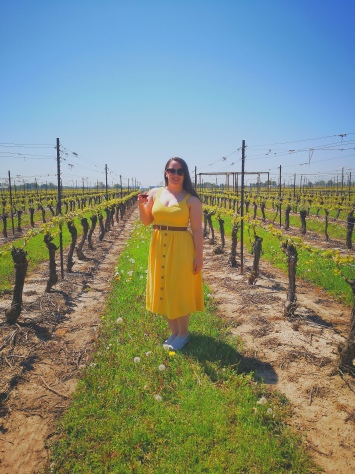 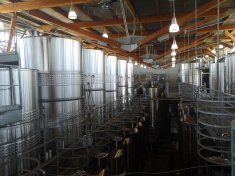 Niagara-on-the-Lake
After that we walked into town and en route we saw so many cute neighbourhoods and adorable wee houses. The town centre feels kind of old fashioned (for the American continent anyway) and totally reminded me of Stars Hollow from The Gilmore Girls. We had a lush lunch from a Greek restaurant called Fournos. I forgot to take a photo of it but it was so good I’ll be dreaming about it for a while. I had their Paradise Salad which had leafs, walnuts, strawberries, dried cranberries, cucumber, tomato, red onion, feta, and a balsamic dressing with some chicken souvlaki on the side, 10/10. We visited the Niagara Apothecary which is a museum of a 19th Century pharmacy. My mum was super interested given she works for the NHS and I had a good chat with the guy who works there. After that we walked down to Lake Ontario which was beautiful. 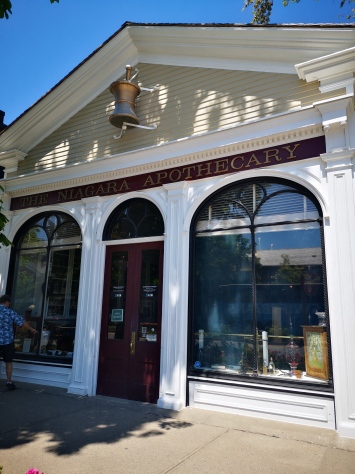 Gotta get that maple leaf

On our final night we made sure to get a good spot for a perfect view of the fireworks. Top tip: get yourself a space on the boulevard in front of the American Falls. The fireworks happen every night over the summer season from 10pm and they only last 10 minutes which is long enough to be standing outside without getting bored. The fireworks were really cool and the Falls are illuminated below so you’ll never experience anything like it anywhere else. 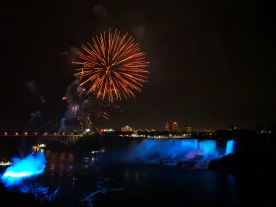 I absolutely LOVED being in Niagara and I am dying to get my booty back in Canada. I wish we had the time to go up to Toronto and explore some more of that but a dream for another day…

One thought on “Visiting the beautiful Niagara Falls”