Here come’s the big bad Broadway blog! My love for theatre is the main attraction I have towards New York city because it is home to many iconic productions. I am very familiar with the British counterpart in the West End but visiting Broadway has been high on the bucket list for a while and it definitely didn’t disappoint!
Our show selections were so varied that it meant I could really enjoy each show respectively without being able to directly compare them. My only regret is that there was no all singing all dancing Broadway razzmatazz classic musical on this season but hey ho. We also happened to be hitting the boards just after the Tony nominations were announced so there was lots of excitement! Here we go…

This is the hot ticket in town at the moment with 14 Tony nominations! I had wanted to see it in London when it was at the National but didn’t get a chance to go down for this one. Hadestown tells the myth of Orpheus and Eyridice in a sort of 1920s Jazz Age New Orleans style through beautifully written folk music. It has such a different vibe, especially for what you would expect from a Broadway musical and I think that’s what makes it so special. In the way that Hamilton paved a new path in terms of the styles that musical theatre can be, I think Hadestown does the same along a different avenue. The production is full of life and energy and for lack of a better word, it just oozes coolness. The stage design is gorgeous, it appears really simple but the way it subtly changes throughout the show is so effective. Plus there’s a fun 3 track revolve and centre elevator so make for some fun travelling. The night we attended Eva Noblezada was off but her understudy Jessie Shelton did an amazing job as Eurydice. I fell in love with Hermes (André de Shields) and Persephone (Amber Gray) and the bass range on Hades (Patrick Page) is unbelievable.

I think Hadestown is such a unique musical and I feel lucky to have experienced it. It’s the kind of soundtrack that I can see myself going back to again and again because as well as being a beautiful storytelling msuical, it’s also everyday listenable music. The main message of the show is about hope and having faith in your optimism and I really like that. 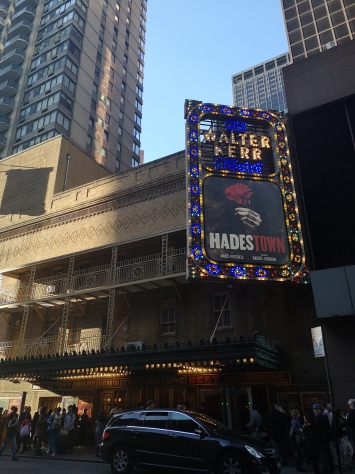 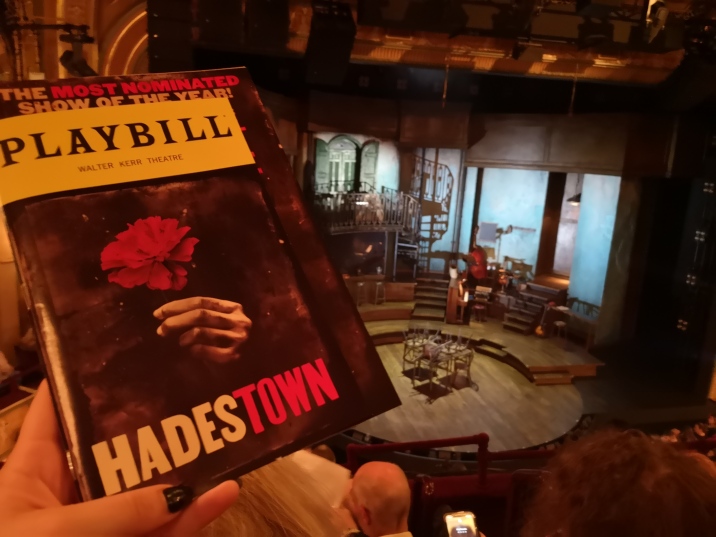 So this was the show that we hadn’t actually planned to see, we had a night free and thought we’d take a crack at finding some cheap tickets once we got there. The Prom was the choice based on recommendations from a reliable source found in Shubert Alley and with decent seats available on TodayTix. As a result of all that I came into this with zero knowledge at all, other than it was supposed to be a fun show. The Prom is about a girl who wants to invite her girlfriend to the high school prom but the PTA kick off and try to cancel it out of some lovely small town homophobia. Four ageing Broadway queens need to repair their reputations and decide this will be their cause – chaos and fabulousness ensues but at the end of it we get some really lovely moments of acceptance.

I don’t think it’s anything groundbreaking but it sure is a lot of fun and really quite sweet. Genuinely, it is the American version of Everybody’s Talking About Jamie but with more Broadway zazz and less family. The show is full of energetic dancing which is so fun to watch and very strong from the ensemble. The campy narccicistic Broadway stars are so funny and the cast is full of absolutely banging voices. So glad I got to see this! 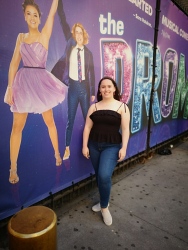 This gem is something I was looking forward to for so long. The DEH soundtrack has been on heavy rotation for a while because it’s so damn good. Seeing it in person was so satisfying, firstly because it gave me all the frickin goosebumps. Furthermore, it was satisfying to actually see things play out on stage. The digital staging is really cool and feels appropriately overwhelming as is the idea with the social media noise we face today. I was apprehensive that I might feel on edge because it wasn’t Ben Platt’s gorgeous voice I was hearing but Andrew Barth Feldman was incredible. He feels so authentic as a teenager because he is one, but I think that really adds to the story and further enhances the authenticity of the show. It’s easy to feel swept up in the emotion of DEH, especially for people with experience having or supporting mental health issues. It was everything I wanted it to be.

Had to hit up a wee revival whilst we were there and it was epic to see a show at the Lincoln Center. My Fair Lady is a classic but it’s not the best musical in the world, I’ll admit. It was awesome to see a stagey legend like Laura Benanti perform but it wasn’t perfect. Here are my thoughts: it is an absolutely stunning production, with super lush design and a luxurious stage. The set design is gorgeous and has some lovely aspects playing with the angles and perspectives. The lighting design was beautifully playing with shadow and silhouette during those scene changes and the costumes are just top dollar, especially glamorous in the Ascot scene. The direction of the show did a great job of keeping the pretty dated text feeling lively and fun.

That being said, I did wonder if some of the show’s humour was lost on the American audience cause they don’t know what they’re saying or talking about. At times I feel like the audience laughs were more on a sort of fetishising of the quaint British stereotype. For me, it was glaringly obvious when the accents went very off (quite a few times) and that sort of snapped me out of the fantasy. Especially disappointing considering they’ve been doing this production for months now, I’d have expected the voices to be spot on. In terms of vocal quality, their singing was beautiful but the accents really lost me. It definitetly wasn’t a bad show but the flaws really distracted me.

This one isn’t technically a Broadway show but it was one of the best experiences I had in New York and probably the most unique experience I’ve ever been through. Situated in a Chelsea warehouse made up to look like an old school hotel, you walk through dark corridors and find yourself in the Manderley bar, speakeasy jazz style vibes. Upon entry you are given a playing card which determines which group you enter the story with and a creepy looking white mask with a beak that you have to wear throughout the evening. The immersive play happens over 5 floors of rooms designed to look like a mental hospital, high street, Victorian home, hotel and ballroom that you can freely explore. Amongst the curious exploring there are also a bunch of actors almost non verbally conveying the story, through lots of super cool physical theatre and dance. The story loosely follows Macbeth with sprinklings from Rebecca, the Paisley witch trials and some Hitchcock noir films.

It turns out I was really lucky and one of the rare people who got to experience the 6th floor in a one-to-one moment. At the beginning of my visit I was let off the elevator alone on the 6th floor, turned around to find I was alone before being beckoned by an older lady who invited me to return to Manderley (á la Rebecca). This was the first thing I experienced so I was confused as to what was going on, where had the other people gone and why is this lady so focused on me? Here’s what happened though… (spoiler warning, if that bothers you). The woman was happy to see me, she held out her hands and said she’d been dreaming about me, we’d returned to Manderley. I realised that she was supposed to be the narrator from Rebecca. She spoke lines from the book, then she sat me down in a Victorian wheel chair and pushed me down the long hallway in the dark. She then laid the chair down flat so I was looking up: the ceiling was covered in a miniature of Manderley, then she pushed me back down the hallway. Then she stood me up, took my hand, and we ran down the hallway. She told me I must never return to Manderley and showed me out. This part was so immersive and interactive and everything just came together in an intense way. Honestly after that I just kept looking for that level of intensity again but for the most part the actors do not interact with you. I’ve never experienced anything like that before, it was so immersive and curious.